More and better and public services! This demands a battle that the ACOD (CGSP), as a public-service trade union, has been waging for years.

In times of climate crisis, social degradation and liberalization, it is of crucial importance that we put the need for public ownership and management of our economy back on the agenda.  Because it is only if we put our economy back into public hands and are able to plan democratically that we can achieve a sustainable economy in which the general interest, and not profit, is paramount.

Hence our campaign: We Own It!

Trade unions generally only appear in the media in conflict situations, when we are on the defensive, with demonstrations and strikes. Even though they are successful, a broader public generally misses the context of this social struggle. Ryanair, Deliveroo, Aviapartner, Bpost: all these actions are part of a single countermovement against a neoliberal policy culture that wants to save, liberalize and privatize.

For our trade union – the General federation of public-sector trade unions  – it is not just about defending the rights of workers. We are fighting for more and better public services and therefore for the democratic organization of our society. We pay for our public services and we need them, so it is logical that we manage and own them ourselves. We Own It! That is why it is important that we, as a government union, proactively conduct the debate on the ownership issue.

On 26 April 2018, we organized a symposium on this subject in collaboration with the cultural centre Vooruit in Ghent. You can find more information here (in Dutch).

Would you like to watch the talk of our guests again? Here are the recordings of the talks by Cat Hobbs and Andrew Cumbers.

Following the symposium We Own It!, ACOD Cultuur (CGSP Culture) and Vooruit organized a series of debates titled ‘Building Coalitions’. During the 2018–19 season, we are already planning four debates on the importance of public media (14 November), public transport (16 January), energy management (13 March) and civil action (5 June). You can find more information here (in Dutch).

During the summit The Art of Organizing Hope in Ghent (November 2018), a 17-year-old student, Marion de Schepper, gave a clever re-enactment of the historical speech that Cat Hobbs (founder of the citizens’ movement We Own It in the UK) gave during a Labour meeting. 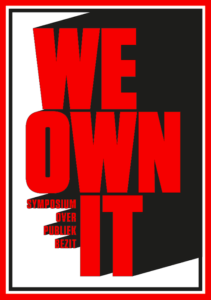 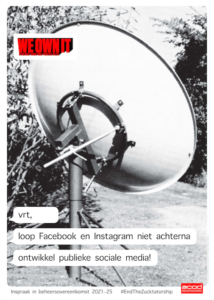